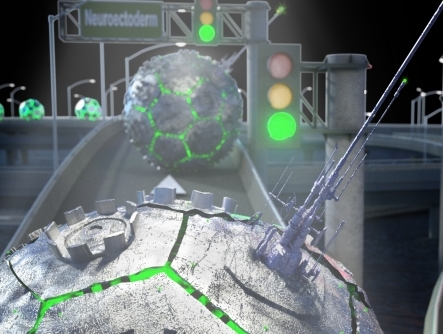 Unraveling the Mystery of Stem Cells

How do neurons become neurons? They all begin as stem cells, undifferentiated and with the potential to become any cell in the body.

Until now, however, exactly how that happens has been somewhat of a scientific mystery. New research conducted by UC Santa Barbara neuroscientists has deciphered some of the earliest changes that occur before stems cells transform into neurons and other cell types.

“Jiwon’s discovery is very important because it gives us a fundamental understanding of the way stem cells work and the way they begin to undergo differentiation,” said senior author Kenneth S. Kosik, the Harriman Professor of Neuroscience Research in UCSB’s Department of Molecular, Cellular, and Developmental Biology. “It’s a very fundamental piece of knowledge that had been missing in the field.”

When stem cells begin to differentiate, they form precursors: neuroectoderms that have the potential to become brain cells, such as neurons; or mesendoderms, which ultimately become cells that comprise organs, muscles, blood and bone.

Jang discovered a number of steps along what he and Kosik labeled the PAN (Primary cilium, Autophagy Nrf2) axis. This newly identified pathway appears to determine a stem cell’s final form.

“The PAN axis is a very important player in cell fate decisions,” explained Jang. “G1 lengthening induces cilia protrusion and the longer those cellular antennae are exposed, the more signals they can pick up.”

For some time, scientists have known about Gap 1 (G1), the first of four phases in the cell cycle, but they weren’t clear about its role in stem cell differentiation. Jang’s research demonstrates that in stem cells destined to become neurons, the lengthening phase of G1 triggers other actions that cause stem cells to morph into neuroectoderms.

During this elongated G1 interval, cells develop primary cilia, antennalike protrusions capable of sensing their environment. The cilia activate the cells’ trash disposal system in a process known as autophagy.

Another important factor is Nrf2, which monitors cells for dangerous molecules such as free radicals — a particularly important job for healthy cell formation.

“Nrf2 is like a guardian to the cell and makes sure the cell is functioning properly,” said Kosik, co-director of the campus’s Neuroscience Research Institute. “Nrf2 levels are very high in stem cells because stem cells are the future. Without Nrf2 watching out for the integrity of the genome, future progeny are in trouble.”

Jang’s work showed that levels of Nrf2 begin to decline during the elongated G1 interval. This is significant, Kosik noted, because Nrf2 doesn’t usually diminish until the cell has already started to differentiate.

“We thought that, under the same conditions if the cells are identical, that both would differentiate the same way, but that is not what we found,” Jang said. “Cell fate is controlled by G1 lengthening, which extends cilia’s exposure to signals from their environment. That is one cool concept.”