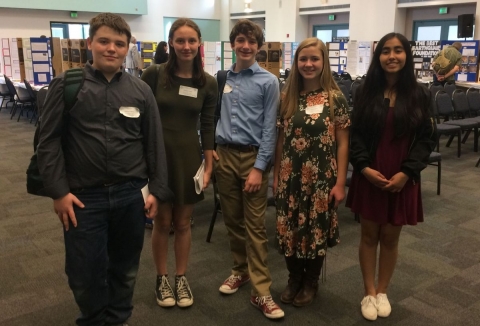 Three Solvang School students won awards and earned cash at the recent Santa Barbara County Science Fair, and one was chosen to represent the county at the California State Science Fair.

Fernanda was recognized by the Association of Old Crows for Outstanding Project in Electronics or Computers, which came with a $50 cash award.

Tessa received a Bronze Medal in the Junior High Botany and Zoology Division.

She also was selected as one of the students to represent Santa Barbara County at the 66th annual California State Science Fair for sixth- through 12-graders set for April 24 and 25 at the California Science Center, formerly the California Museum of Science and Industry, in Los Angeles.

An estimated 1,000 students from 400 schools throughout the state are expected to present 900 projects in competition for a total of $60,000 in prizes, according to State Science Fair officials.

“The kids all had a great time and I was so proud of how they took the judging in stride,” said Erin Dunkle, who teaches Solvang School’s science elective course where the students’ projects were designed, researched and conducted.

“They were excited about the labs they got to tour, and I think it was an eye-opening, horizon-expanding experience for all,” Dunkle said.

Describing the experience to classmates the following week, Fernanda said, “I want to go again next year.”

At the County Science Fair, each student was interviewed and his or her project was scored by multiple judges.

Afterward, the students participated in a campus tour and a research laboratory tour organized by the Science Fair, Dunkle said.

They also visited the laboratory of Dennis Clegg, who studies cell therapies for ocular diseases and was Dunkle’s research advisor during her graduate research at UCSB. The students heard Clegg talk about his research, saw the tissue culture facility and observed scientists in action.

This report was compiled by News Editor Mike Hodgson. He can be reached at mhodgson@leecentralcoastnews.com.