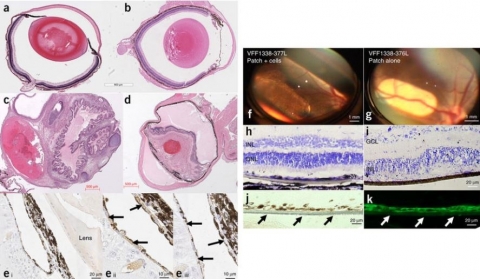 A few months later, he became part of a clinical trial that used stem cell-derived ocular cells developed in part by researchers at UC Santa Barbara. His retinal eyepatch was implanted at Moorfields Eye Hospital, a National Health Service (NHS) facility in Waters’ hometown of London.

In the months before Waters’ surgery, his vision was poor and he couldn’t see anything out of his right eye. After the surgery, his eyesight improved so much that he could read the newspaper and help his wife with gardening.

The results of this groundbreaking clinical study, published in Nature Biotechnology, describe the safe and effective implantation of a specially engineered patch of retinal pigment epithelium cells derived from stem cells to treat people with sudden severe sight loss from wet AMD — the form that afflicted Waters. This is the first description of a completely engineered tissue that has been successfully used in this way.

Macular degeneration accounts for almost 50 percent of all visual impairment in the developed world and usually affects people over 50 years of age. AMD affects the central (reading) vision while leaving the surrounding vision normal. Wet AMD is generally caused by abnormal blood vessels that leak fluid or blood into the region of the macula in the center of the retina, and it almost always begins as dry AMD. Researchers hope the new procedure will also help in the future to treat dry AMD.

The study investigated whether the diseased cells at the back of the patients’ affected eye could be replenished using the stem cell patch. A specially engineered surgical tool was used to insert the patch under the retina in the affected eye of each patient in an operation lasting one to two hours.

In addition to Waters, a woman in her early 60s who also suffered from a severe form of wet AMD and declining vision underwent the procedure. She and Waters were monitored for 12 months and reported improvements to their vision. They went from not being able to read at all — even with glasses — to reading 60 to 80 words per minute with normal reading glasses.

“We hope this will lead to an affordable ‘off-the-shelf’ therapy that could be made available to NHS patients within the next five years,” said Coffey, who founded the London Project to Cure Blindness more than a decade ago.

The study is a major milestone for the project, which is a partnership of Moorfields Eye Hospital NHS Foundation Trust, the University College London Institute of Ophthalmology and the National Institute for Health Research.